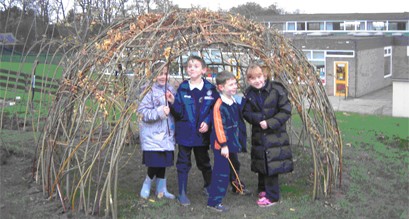 We worked with Year 2 pupils at Normanby Primary School exploring the uses of willow in sculpture projects.

The first part of the project was held indoors.
We began our first session by demonstrating the flexibility of willow and how it could be sculpted into different forms. The children were show different items made from willow such as baskets and large animal sculptures. We explained how the willow had to be soaked in water to make it pliable. Simple shapes were then demonstrated for the children to recognise such as circles and stars.
As an introduction to simple weaving each child was given an open fish shape and helped to learn a basic figure of eight weave to fill in the shape. Staff were also shown how to begin the basic shape and worked with the children to finish the weaving. We also explained how this basic technique could be applied to other materials such as raffia, wool and string.
The second session was devoted to finishing off the fish weaving and then decorating the fish sculptures by using paint. The plan was to use the individual sculptures to create a group sculpture of a shoal of fish with a suitable watery backdrop that could decorate a classroom. Most of the children were keen to take their own fish home to show off. Some of the fish have already been installed in the classroom.

After consulting with staff at the school it was decided that the creation of an outdoor educational and play area would be beneficial for the children as it would be a resource that various year groups could use in differing ways.

We decided upon a living willow dome and tunnel to be situated near the nursery area. Staff brought children out in small groups throughout the 2 days to help with the construction. The children were provided with a clipboard each and encouraged to draw the shape being constructed and write down relevant words such as circle, dome, tunnel.

The children helped in the construction by planting willow and weaving (using the skills learnt on the fish weaving). The other classes, including the nursery, came out to see the progress of the work and were given a talk on the project. We chatted about how classes could use the structure for outdoor lessons and play.

Staff and children are keen to see the living willow sculpture as a starting point for developing the surrounding area into a resource that could be used for later environmental projects. These could include a butterfly garden, plantings of native trees and shrubs and perhaps a storytelling area.

There were many educational benefits. The children were able to work as small groups, helping and encouraging each other. Children who mastered the weaving technique quickly were about to help out their classmates. The children also learnt that ?art? can be made from all kinds of materials and does not have to be painting and drawing. The children learnt about sculpture and the different materials that can be used to create sculptures, from traditional materials such as wood and stone to more contemporary ideas and materials (fibres, willow sticks etc) using weaving skills. We were also able to chat about how birds and animals construct nests and dreys (squirrels) using a kind of weaving.

We were also able to chat able construction techniques through the ages and in different cultures such as medieval wattle and daub, African huts and Eskimo igloos (the willow construction was easily compared to an igloo? (?that penguins live in? as remarked by several children).

Another educational benefit was that the children were able to discuss how plants grow and the effects of different seasons on plants. We gave each class a living willow star to put in a jar of water in the classroom. This was to form the basis of a project involving observing how the willow changes over time, ie growing roots, shoots, leaves etc and recording any changes